Editor’s note: “Noam Chomsky is Institute Professor Emeritus in the Department of Linguistics and Philosophy at Massachusetts Institute of Technology. His most recent book is “Masters of Mankind.”His web site is www.chomsky.info. The views expressed in this commentary are solely his.

(CNN)After the terrorist attack onCharlie Hebdo, which killed 12 people including the editor and four other cartoonists, and the murder of four Jews at a kosher supermarket shortly after, French Prime Minister Manuel Valls declared “a war against terrorism, against jihadism, against radical Islam, against everything that is aimed at breaking fraternity, freedom, solidarity.”

Millions of people demonstrated in condemnation of the atrocities, amplified by a chorus of horror under the banner “I am Charlie.” There were eloquent pronouncements of outrage, captured well by the head of Israel’s Labor Party and the main challenger for the upcoming elections, Isaac Herzog, who declared that “Terrorism is terrorism. There’s no two ways about it,” and that “All the nations that seek peace and freedom [face] an enormous challenge” from brutal violence. 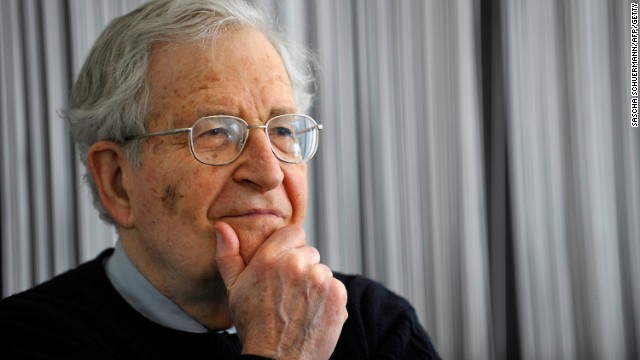 The crimes also elicited a flood of commentary, inquiring into the roots of these shocking assaults in Islamic culture and exploring ways to counter the murderous wave of Islamic terrorism without sacrificing our values. The New York Times described the assault as a “clash of civilizations,” but was corrected by Times columnist Anand Giridharadas, who tweeted that it was “Not & never a war of civilizations or between them. But a war FOR civilization against groups on the other side of that line. #CharlieHebdo.”

The scene in Paris was described vividly in the New York Times by veteran Europe correspondent Steven Erlanger: “a day of sirens, helicopters in the air, frantic news bulletins; of police cordons and anxious crowds; of young children led away from schools to safety. It was a day, like the previous two, of blood and horror in and around Paris.”

Erlanger also quoted a surviving journalist who said that “Everything crashed. There was no way out. There was smoke everywhere. It was terrible. People were screaming. It was like a nightmare.” Another reported a “huge detonation, and everything went completely dark.” The scene, Erlanger reported, “was an increasingly familiar one of smashed glass, broken walls, twisted timbers, scorched paint and emotional devastation.”

These last quotes, however — as independent journalist David Peterson reminds us — are not from January 2015. Rather, they are from a report by Erlanger on April 24 1999,which received far less attention. Erlanger was reporting on the NATO “missile attack on Serbian state television headquarters” that “knocked Radio Television Serbia off the air,” killing 16 journalists.

“NATO and American officials defended the attack,” Erlanger reported, “as an effort to undermine the regime of President Slobodan Milosevic of Yugoslavia.” Pentagon spokesman Kenneth Bacon told a briefing in Washington that “Serb TV is as much a part of Milosevic’s murder machine as his military is,” hence a legitimate target of attack.

There were no demonstrations or cries of outrage, no chants of “We are RTV,” no inquiries into the roots of the attack in Christian culture and history. On the contrary, the attack on the press was lauded. The highly regarded U.S. diplomat Richard Holbrooke, then envoy to Yugoslavia, described the successful attack on RTV as “an enormously important and, I think, positive development,” a sentiment echoed by others.

There are many other events that call for no inquiry into western culture and history — for example, the worst single terrorist atrocity in Europe in recent years, in July 2011, when Anders Breivik, a Christian ultra-Zionist extremist and Islamophobe, slaughtered 77 people, mostly teenagers.

Also ignored in the “war against terrorism” is the most extreme terrorist campaign of modern times — Barack Obama’s global assassination campaign targeting people suspected of perhaps intending to harm us some day, and any unfortunates who happen to be nearby. Other unfortunates are also not lacking, such as the 50 civilians reportedly killed in a U.S.-led bombing raid in Syria in December, which was barely reported.

One person was indeed punished in connection with the NATO attack on RTV — Dragoljub Milanović, the general manager of the station, who was sentenced by the European Court of Human Rights to 10 years in prison for failing to evacuate the building, according to the Committee to Protect Journalists. The International Criminal Tribunal for Yugoslaviaconsidered the NATO attack, concluding that it was not a crime, and although civilian casualties were “unfortunately high, they do not appear to be clearly disproportionate.”

The comparison between these cases helps us understand the condemnation of the New York Times by civil rights lawyer Floyd Abrams, famous for his forceful defense of freedom of expression. “There are times for self-restraint,”Abrams wrote, “but in the immediate wake of the most threatening assault on journalism in living memory, [the Times editors] would have served the cause of free expression best by engaging in it” by publishing the Charlie Hebdo cartoons ridiculing Mohammed that elicited the assault.

Abrams is right in describing the Charlie Hebdo attack as “the most threatening assault on journalism in living memory.” The reason has to do with the concept “living memory,” a category carefully constructed to include Theircrimes against us while scrupulously excluding Our crimes against them — the latter not crimes but noble defense of the highest values, sometimes inadvertently flawed.

This is not the place to inquire into just what was being “defended” when RTV was attacked, but such an inquiry is quite informative (see my A New Generation Draws the Line).

There are many other illustrations of the interesting category “living memory.” One is provided by the Marine assault against Fallujah in November 2004, one of the worst crimes of the U.S.-UK invasion of Iraq.

The assault opened with occupation of Fallujah General Hospital, a major war crime quite apart from how it was carried out. The crime was reported prominently on the front page of the New York Times, accompanied with a photograph depicting how “Patients and hospital employees were rushed out of rooms by armed soldiers and ordered to sit or lie on the floor while troops tied their hands behind their backs.” The occupation of the hospital was considered meritorious and justified: it “shut down what officers said was a propaganda weapon for the militants: Fallujah General Hospital, with its stream of reports of civilian casualties.”

Evidently, this is no assault on free expression, and does not qualify for entry into “living memory.”

There are other questions. One would naturally ask how France upholds freedom of expression and the sacred principles of “fraternity, freedom, solidarity.” For example, is it through the Gayssot Law, repeatedly implemented, which effectively grants the state the right to determine Historical Truth and punish deviation from its edicts? By expelling miserable descendants of Holocaust survivors (Roma) to bitter persecution in Eastern Europe? By the deplorable treatment of North African immigrants in the banlieues of Paris where the Charlie Hebdo terrorists became jihadis? When the courageous journal Charlie Hebdo fired the cartoonist Siné on grounds that a comment of his was deemed to have anti-Semitic connotations? Many more questions quickly arise.

Anyone with eyes open will quickly notice other rather striking omissions. Thus, prominent among those who face an “enormous challenge” from brutal violence are Palestinians, once again during Israel’s vicious assault on Gaza in the summer of 2014, in which many journalists were murdered, sometimes in well-marked press cars, along with thousands of others, while the Israeli-run outdoor prison was again reduced to rubble on pretexts that collapse instantly on examination.

Also ignored was the assassination of three more journalists in Latin America in December, bringing the number for the year to 31. There have been more than a dozen journalists killed in Honduras alone since the military coup of 2009 that was effectively recognized by the U.S. (but few others), probably according post-coup Honduras the per capita championship for murder of journalists. But again, not an assault on freedom of press within living memory.

It is not difficult to elaborate. These few examples illustrate a very general principle that is observed with impressive dedication and consistency: The more we can blame some crimes on enemies, the greater the outrage; the greater our responsibility for crimes — and hence the more we can do to end them — the less the concern, tending to oblivion or even denial.